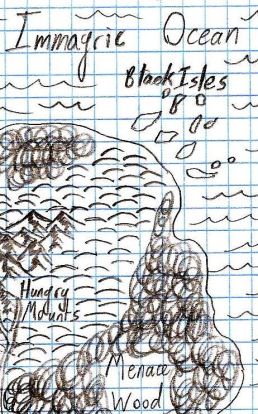 The Black Isles are little more than black rocks in the ocean off the North East coast of the Midgeland. They are a continuation of Hungry Hills geographically and like the Hungry Mounts are populated primarily by drakes, including Jealkia, or Storm Crawlers. The isles, with their black rocks and soil, can be hard to see in the dark water, even during the day. Powerful storms coming in off the Immagric Ocean often strike the Black Isles the hardest. They shield the Hungry Mounts from hurricanes and are covered with young trees that have cropped up since the last storm. These storms often bring influxes of Jealkia that ravage the area, stealing food from other predators in the Hungry Mounts and the Menace Wood. The orcs living in the Hungry Mounts do not fear the storms, but they do prepare frantically for the arrival of the packs of mobile hunters they bring. The minotaurs of the Bull Caves similarly bunker down when storms threaten. Further to the South, they do not see as much an increase in drake behavior, but the new scarcity of prey has been known to drive hungry drakes to hunt them. 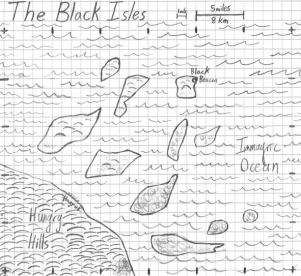 While settling the Midgeland, the settlers of Reach sent ships North and South looking for other places build when the war was over. Seeing the danger of the Black Isles to their movements around the peninsula, they built a lighthouse on one of the isles, known by the sailors of Alvar and Tinin as the Black Beacon. The Black Beacon lies dormant, but their are rumors that fae lights sometimes glimmer through its broken windows. The roughness of the sea and the lack of a landing point have so far prevented investigation.

Though the Black Isles are unpopulated, Hagruk, a small orc town, lies on the coast nearby, nestled in the Hungry Hills. These orcs are primarily fishermen and fish in the waters of the Black Isles. They have enough warriors to defend them from drake attacks, but their existence is always tenuous. The Hagruk orcs eat better than most in the Hungry Mounts, and so they struggle through the storms and drake attacks contently. 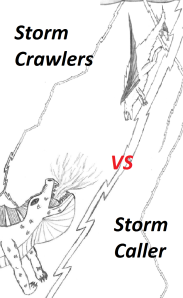 Later today I will be posting an encounter between some Jealkia blown in from the Immagric Ocean and a Hilkia of the Menace Wood, something that happens fairly frequently following storms in the Black Isles.

As a player, would you go to the Black Isles? Why? As a Master Weaver, what would be in Black Beacon? Would the Hagruk orcs cooperate with the players? What would the players get by visiting? Let us know below.