One-shot: Sparks Fly in the Empire of Fiery Wings

With Independence Day and one player not able to play the day before, I offered to throw together a quick, on-theme one-shot. It was an excuse to practice throwing together 5e stuff on short notice and to test Campaign Cartographer.

It began with three adventurers living under the tyranny of the Empire of Fiery Wings. Like anyone else, they disliked their draconid overlords, but they were mostly out to get what they could for themselves:

I rolled them random loot appropriate for a level 3 party to have obtained in their adventures (I may have mistakenly rolled for a level 4 party, I realize as I write this, since I rolled the remainder of Xanathar’s recommended level 1-4 loot to be found in this dungeon). They had a good number of healing potions, some questionable scrolls, a rod of the pact keeper, and an elemental gem they were kind enough not to use.

The party started out having heard rumors that a nearby Empire facility where valuable chemicals were frequently delivered had emptied of occupants, with dozens of kobolds and lizardfolk leaving it in a caravan days before. It seemed like the haul of a lifetime, if the facility really were left empty, so they set out to loot it.

Upon arriving they encountered a small group of guards outside the door, including flying kobolds on the balcony above. While the facility was apparently not completely empty, their intel was good, so they decided to proceed, quickly dispatching the guards with little (no?) damage.

This was planned as a Medium difficulty encounter, but because of their absurd armor classes on the front line and the opportunity to ambush, it came out pretty easy.

In through the doors, they followed the corridor, ignoring the first door and walked into an explosive trap that damaged Armin pretty badly. The sound prompted the seven kobolds in the room next door to rush out and they were soon surrounded in the hall. Unable to stay out of combat, Pegolas took some significant damage and used his remaining spells to heal himself. They all got burned a bit by a fire cracker thrown by one of the kobolds.

This one was easy on paper (even with the numbers multipliers), but with the party jammed into a corridor with attackers swarming in on both sides and no multi-target tools at their disposal, this was definitely the hardest fight of the one-shot.

With the kobolds dealt with, they went into the room they came from, finding it full of work tables. They gathered up a few of the fire crackers, which the kobolds seemed to have been making, but decided to come back for the ingredients left on the tables. As they headed for the door, a kobold entered, apparently intending to move any finished firecrackers. They quickly killed him and proceeded up the stairs to the balcony first.

They soon found themselves again with the opportunity to surprise the enemy, but with two people in heavy armor, they awoke the kobolds and lizardfolk in the bunk room and a fight broke out. They took a couple hits this time, but once again won the fight in short order, using most of their healing potions to get everyone back into fighting shape.

Another easy encounter, went about as expected. With the players staying out of the hammock-filled room, they didn’t have to deal with the difficult terrain. 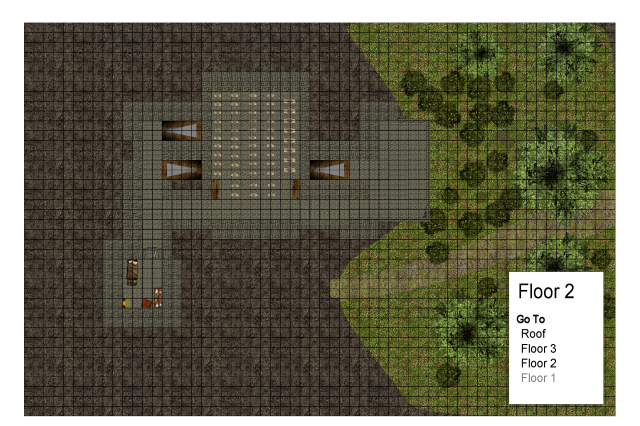 After dispatching two more kobolds in the masters quarters, they looted it, finding some quality goods and money. The then headed up the stairs, rolling phenomenal stealth checks despite disadvantage. On the top balcony (full of firecrackers and fireworks), they ambushed four kobolds and a half-dragon lizardfolk shaman. In the first round of surprise they dropped almost all of the kobolds, then with high initiative rolls they finished the last and dealt a lot of damage to the half-dragon. With little health remaining on his first turn of the combat, he could make a last desperate fire breath, or turn into a crocodile.

I thought he could buy himself another turn with the crocodile, but with another crit coming in, they killed him straight from crocodile form. The narrative goal of the encounter was for the fire breath to set off some fireworks (Independence Day session, remember) so as he died I had him spew enough flames to set some rockets to launch out the balcony and explode in the sky.

This was supposed to be a hard encounter, but only one enemy ever attacked, and his chances of hitting were 1 in 5. High AC, surprise rounds, and initiative really make for big swings in danger.

At this point, we were disappointed to have the one-shot come to an end, so I introduced a red dragon wyrmling as the real final boss. It managed to land a bite on Armin and a flame breath on Jixoah (who made his Dex save and had lots of temp HP anyway), but the real damage was that the flame breath set off fireworks that shot all over, threatening to destroy some of their precious loot.

They soon finished the little dragon, though, and were in the process of moving their new supply of explosives when villagers arrived to see the broken dragon on the mountain side. They had come at the sound of the fireworks, but seeing the dead dragon, hailed the adventurers as liberators and the revolution began!

This last fight was thrown in to see if there was a such thing as a hard encounter they would have trouble with. No surprise, no funny business, CR 4 for 3 level 3 adventurers. They had desirable position, sure, but this supposedly hard encounter did little to threaten them with their tanky character builds.

Nothing polished about this one shot, but one player said he thought the maps were professionally done. Another thought they were too busy and said he couldn’t see his character on them. Campaign Cartographer has some cleaner templates, so I’ll try one of those next time. All in all, a good time. I will definitely be rolling random magic items for one-shots in the future and making up one-shots on the spot is pretty easy, if you don’t have to do maps.