The Raven’s Roost adventurers descend into the buried Dragon Temple, knowing that some of the Estrei have entered ahead of them. 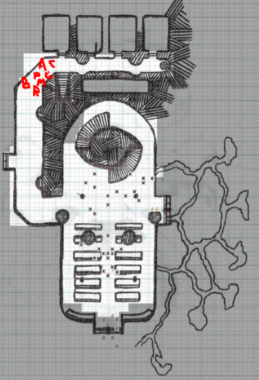 The light from Solus (Rathdar’s sword of Vardor’s light) reveals dozens of large insect bodies on the temple floor. The light also attracts more of them as they swarm out of cracks in the walls and through the darkened pews at the back of the temple. Rathdar rushes forward, quickly cutting through the lightning bugs in the pews while Bilbil and Amhran’s undead blast away the closer ones and they retreat down a side hall. The bugs start to retreat and Rathdar joins the withdrawal as they find a stair deeper into the temple.

They quickly descend, opting to pursue the Estrei dungeon delvers rather than search this floor and try to clear out the infestation left behind by the enemy.

On the floor below, they quickly find the Estrei robot, hiding upon seeing their light, and are free to search among the many shrines of the temple for stairs down. Other than one statue that lashes out at them as they enter a shrine, they encounter no other threats before eventually finding a hidden door behind a curtain and stairs that descend further. 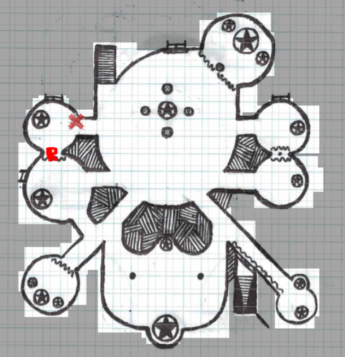 The floor below presents a dusty hall where it is apparent that the enemy spent hours searching all parts of the hall for a way down. When the footprints in the dust present clue where they eventually found a path, Rathdar prays to Vardor who tells him that the enemy took the coward’s path and that it slowed them. Hearing this, Rathdar goes to the North, the doors where it is clear the Estrei spent almost no time.

Through the doors, he sees a massive creature with a tunnel into the buried balcony. He immediately engages, and while he takes some damage and spends much of his SP on Divine Blow, Amhran and Bilbil help him to triumph and Amhran animates the bug with the help of Emedia. They prepare to descend via the beast’s tunnel and hope to be gaining on their enemy.

The Primordial Frontier Campaign is set in the Perenia world of the Tyranny of Mundanity and Stormguard campaigns, but in a future where the world is characterized by wild magic below a mile above sea level. Sea level is the new underdark, and, well, I don’t suspect we’ll be seeing the underdark at all.