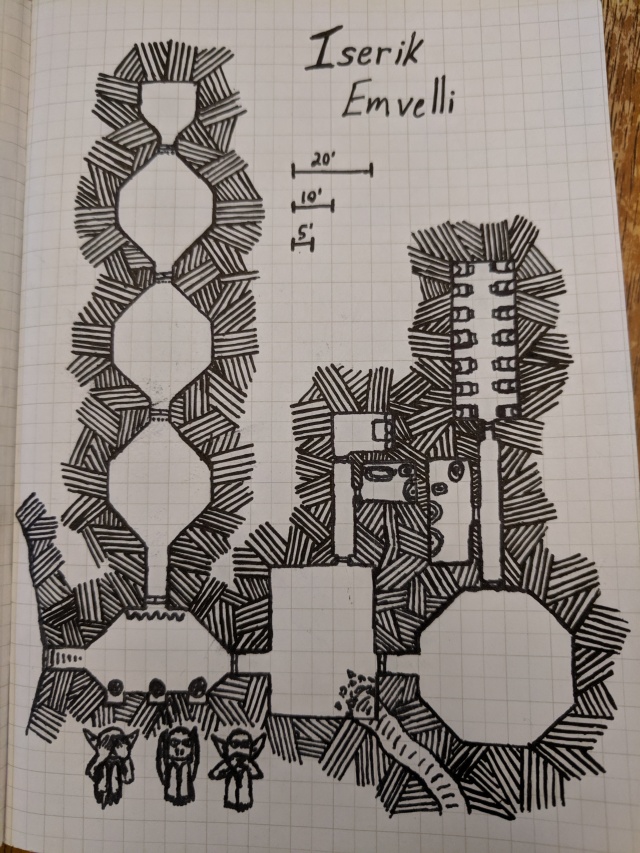 Iserik Emvelli was once a training center and seminary for goblins aspiring to serve the giants they considered gods. It has not seen use since the fall of the giants and though some of its fixtures are in place, it has fallen into disrepair and has new occupants.

Beyond the small, disguised stone door, steps lead down to the main chamber where three statues on the right depict goblins, one covering its eyes, one its ears, and one its mouth. On the left, a heavy, black curtain hides an unlocked door. Opposite the stairs, a door leads into the classroom.

On the wall on the left is a blackboard and a door to the old Master’s chambers, ahead a door into the student common, and in the far right corner a tunnel up from below. Perhaps a bulette or a handful of ankhegs has made the these caverns its home and occupies this room and/or the living areas of the complex.

The fall of giants was a chaotic time with the empire around them declining rapidly in power and many of its facilities quickly falling prey to the enemies that orchestrated the fall. When Iserik Emvelli was evacuated, treasures may have been left behind in the student dormitories or the Master’s chambers that animal occupants now there have no appreciation for.

In the chambers behind the heavy, black curtain the trials of Iserik Emvelli were held for students graduating the teachings. Each of the first three chambers held a challenge hinted at by the statues opposite the curtain.

In the first chamber still resides an immortalized creature that is safer handled blind (like a Basilisk or a Medusa). As part of the trial goblins faced, the creature feels no hunger or other malice, but stares steadfastly at any who enter. The bars on the doors on the far end of the chamber are removed by a mechanism that can be handled blindly, though sight would make it easier. Perhaps near the entrance is a font of poultice to temporarily blind the user, perhaps made from the saliva of a Gibbering Mouther (more on that later).

The second chamber holds a similarly modified creature (immortal and non-aggressive) that assaults hearing creatures, such as a Gibbering Mouther or a Banshee. If deafened, the acolyte on trial can easily avoid the effects of the monster, but must handle a mechanism that hearing would make much easier, relying on touch and/or tremorsense to operated it.

In the third chamber is a Grimlock, “or another creature that has been blinded so it’s senses are similar to those of the Grimlock: blindsight 30 ft. or 10 ft. while defeaned (blind beyond this radius)”. This creature is more aggressive and attacks anything it senses in the room, but a silence or deafness effect can prevent it from finding its prey.

In the last room is an altar that magically produces a token each day marking the bearer as someone who has passed this rite of passage. Perhaps it grants the ability to become blind, deaf, or silent at will.

First map post in a while, more detailed than I meant it to be. Hope you enjoyed. Now that Sentient Skies is released, I should be doing more of these.