On Monday, April 13th, with no one disposed to go join Rovert in gnomish lands, Dohasan goes to join him. Meanwhile, a few of the greener adventurers look for trouble local to the Vale.

Their first thought is to seek out the hunter whose wife reported him missing a few weeks earlier. However, they find her mourning, for her husband was found dead, beaten to death and cast out of the ancient windmill to the South, probably near the time she reported him tardy. Abashed from their visit with a widow in mourning, they ask Matthias if he as any suggestions. He tells them a farmer in Aithreachas reported some pests getting at crops. They set out for the North, pushing to arrive only a little after dark in the new village.

Asking some of the gnomish miners, they find their way to Ol’ Krist’s cottage, where he tells them about the “dern punkin munchers” who have been eating his pumpkins in the night. He allows them to make camp on his porch to watch for the creatures during the night.

During Caramon’s watch, he hears something rustling in the nearby field. He awakens everyone with a call of “Pumpkin Munchers!” and Q leaps from the roof, where he and Rowan had made beds, to pursue the unusual large lizard he sees from his vantage. It flees, but he and Caramon overtake it at the entrance to the new mine tunnel. Caramon is able to subdue it and they return to their fire to inspect it. 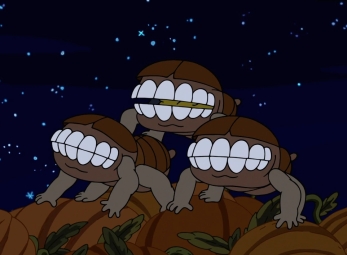 They find that Caramon’s impression of being bitten by large, human teeth was all too accurate and decide in the morning to follow it back to its lair so they can find the others.

It leads them into the back of the mine before scuttling into a crevice to small for any of them to do anything but crawl. Since none of them want to go, Svetlana (the only one too big to crawl it) climbs into Rowans sleeping bag of holding and they push her as far as she can before she is out of sight in the crevice, which continues. Without the others to propel her, she reaches a hand out of the bag and pulls herself along, only to come to a dead end.

As she attempts to return, she hears one of the creatures coming and tries to flee. It grabs the bag and she punches it until it lets go. By calling for the others to make some noise, she is able to navigate her way back to the mine where they are waiting.

Given her difficulty in the finding the way, the others decide to crawl through the seam, carrying her in the bag. They all leave their shields and Caramon is forced to doff his armor. With Caramon in the lead, they soon arrive in a dark cavern with a low ceiling where most of them have to crouch.

Svetlana produces the crank-powered, directional lamp (flashlight) Earl made for her and starts to crank. The tunnel is clearly artificial, seemingly dwarven in origin, and long abandoned. Her loudly buzzing light shows that the tunnel extends far each direction and reveals several of the creatures scuttling toward them from one end. After a successful battle where Svetlana absorbs most of the damage, a few more approach and Svetlana throws the death encharged rock Rowan gave her to obliterate them all.

They follow the tunnel to where collapsed debris blocks it, but here movement through a doorway half covered. Inside, they discover the queen of the pumpkin munchers with three others. Their opening death blast is a miss and causes less damage than they had hoped. The battle turns rough with Svetlana coming near unconsciousness and Caramon being badly bitten by the queen as he stumbles in an attempt to dodge away.

They triumph and Rowan heals Caramon so they can all return with some of the dwarven coins and a sword found in the apparent foundry room. Ol’ Krist is grateful to them and awards them one of his Winter Pumpkins: a magical pumpkin variety used in potions that he tells them he sells to the local alchemist for 5 silver coins. They return to Citadel and sell it to Jared for 8 silver coins. Q, Rowan, and Caramon all level up.

LaB produced this lovely comic during the session. Periodic checking of her progress was an excellent source of interest peaks in our social interest curve this session. 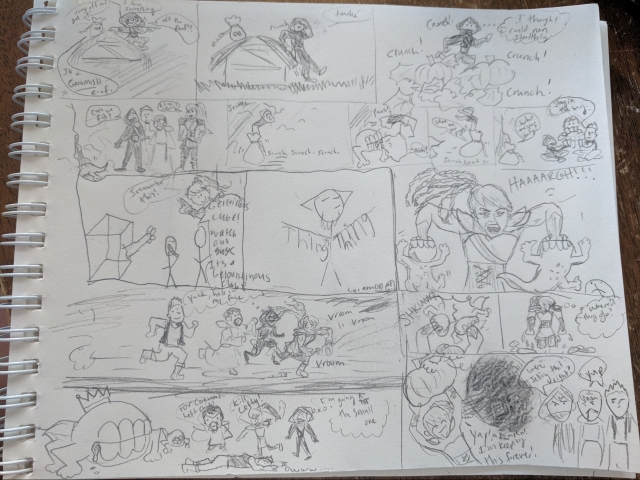