On March 23rd, Roveert and Conan look for someone to return with them to the tomb where Conan was petrified the week before. With the equinox visitors not returned, and Randall enthralled with his studies of underdark plants, they get Gorg:

They enter the tomb searching every suspicious nook and dead end for secret passages. In the first false tomb chamber, they find some giant rats that Rovert melts with a death spell. Soon, all the nooks they considered likely candidates have been searched with no luck. They decide to make their way back through, searching every wall, and Conan finds a section where he had previously burned the mushrooms out where they are now squeezing through crevices in the rock he believes to mark a hidden door, with similar growth apparent on the other side. 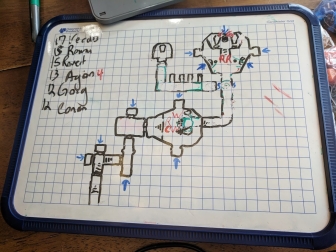 They open the door on the right side and find the passage infested with mushrooms. Conan hurls a fireball down and Gorg slams the door. When they believe the fire has passed, Gorg opens the door again and is attacked by a zombie. Four cap zombies lurch out into their passage, where they kill them all, Conan and Rovert experience some wounds.

They proceed to burn their way down the passage, refraining from burning out the burial nooks the zombies rose from. Around a corner they come to another door that they burn clear of fungus before opening it. It opens to a small, heavily-overgrown room with a large sarcophagus in the center. Gorg creeps in to check for anything of value, but leaps out when the mushrooms start to emit spores! Conan unleashes a fire ball in response to Gorg’s withdrawal and as black smoke starts to billow from the room, they close the door and withdraw around a corner.

Soon, Conan hears the door open and suddenly spores stream around the corner, filling the hall. Gorg, further back, leaves the spore cloud and prepares his crossbow while the other two fight a mighty undead that comes around the corner, wounding Rovert severely and driving them both to retreat back toward where Rovert’s undead wolves can help them. With Gorg taking precise shots at the powerful undead from behind, the wolves engage it and Rovert produces his staff, ordering it to kill itself as effectively as possible.

Powerful blows against the undead from itself and the wolves produce clouds of spores and Rovert and Conan attempt to escape as it and the wolves bring it down. With the undead collapsed, Rovert’s wolves rejoin him and he and Conan start cleaning spores from them while Gorg reloads his crossbows.

Suddenly, the undead rushes from the settling cloud of spores, attacking Gorg who gets evades its claw. With two crossbow bolts directly to the undead’s guts, it soon drops again, but in another spore cloud. Though Rovert and Conan flee the hall (both have been fighting off spore possession), Gorg creeps into the cloud and hoists the undead to get it out of the healing cloud.

It attacks and drops Gorg out from under it. Meanwhile, outside the passages, Rovert convinces Conan to put a fireball down the passage to clear the spores. It isn’t big enough, and while they wait they prepare spells. This time, when it emerges, they are ready and quickly kill it, burning way the spores cloud and spraying the body with flame for good measure. They loot it, but when they go looking for Gorg, he attacks them and withdraws. Knowing his ambush ability, they decide not to pursue.

They go back to Citadel to see if the healers there can do anything for Gorg, but when they are clueless about the mushrooms causing the problem, they head back to the tomb, hoping to bring him in alive so the healers can fix him. On the way, they meet Verdis, Agon, Rowan, and Dohasan returning from the orcish Equinox Festival.

They all go together back to the tomb to better retrain Gorg, but Conan and Rovert respond with enough force to kill Gorg. After Agon cures the disease, the group offers fervent prayer, and Verdis casts a Resurrection spell and manages to bring him back.

They all return to Citadel House, where Rovert, Conan, and Gorg distribute the loot.

This probably accounts for the biggest encounter in this dungeon that just keeps stretching on. Hopefully only one more visit to get the rest of the goods and XP available here. Probably next week!

The incredibly astute might recognize a Dyson Logos map. I’ll give his full map with a link when this ordeal is finally over.

2 Responses to Haven: Lord of Fungus