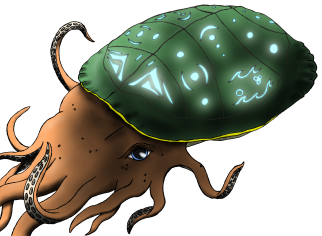 The Tyranny of Mundanity party managed to slay one of these beasts with the help of a crew of pirates and at great cost. It’s a formidable creature that if encountered in the water could easily wipe out anything engaging it. While the party managed to kite it with a ship and prevent it from turtling up, meeting one in the open water or under water could be a devastating encounter for even powerful parties.

Amphibious. The rehabin can breathe air and water.
Siege Monster. The rehabin deals double damage to objects and structures.
Lightning Dissipation. When the rehabin suffers lightning damage on its shell or otherwise, the half of that damage is dealt to all enemies within 5 feet of the rehabin unless they succeed on a DC 19 Dexterity saving throw.
Hypnotic Runes. Each non-undead creature within 60 feet of the rear of the rehabin when not turtled or within 60 feet when turtled than can see it must succeed on a DC 13 Wisdom saving throw or be Stunned and move 5 feet toward the rehabin at the end of each of its turns. The creature can repeat the save each turn.

Actions
Multiattack. The Rehabin makes three tentacle attacks, each of which it can replace with one use of Fling.
Bite. Melee Weapon Attack: +9 to hit, reach 5 ft., one target. Hit: 17 (2d8+8) piercing damage. If the target is a Large or smaller creature grappled by the rehabin, that creature is swallowed and the grapple ends. While swallowed, the creature is blinded and restrained, it has total cover against attacks and other effects outside the rehabin, and it takes 21 (6d6) acid damage at the start of each of the rehabin’s turns.
If the rehabin takes 30 damage or more on a single turn from a creature inside, the rehabin must succeed on a DC 25 Constitution saving throw at the end of that turn or regurgitate all swallowed creatures, which fall prone in a space within 10 feet of the rehabin. If the rehabin dies, a swallowed creature is no longer restrained by it and can escape from the corpse using 15 feet of movement, exiting prone.
Tentacle. Melee Weapon Attack: +11 to hit, reach 20 ft., one target. Hit: 15 (2d6 +8) bludgeoning damage, and the target is grappled (escape DC 16). Until this grapple ends, the target is restrained. The rehabin has twelve tentacles, each of which can grapple one target.
Fling. One Large or smaller object heels it creature grappled by the rehabin is thrown up to 50 feet in a random direction and knocked prone. If a thrown target strikes a solid surface, the target takes 3 (1d6) bludgeoning damage for every 10 feet beyond the surface it was thrown. If the target is thrown at another creature, that creature must succeed in a DC 18 Dexterity saving throw out take the same damage and be knocked prone.
Turtle. The rehabin withdraws into its shell. It can use 10 feet of movement to emerge again. While in its shell, attacks against it not directly in line with the shell’s opening are against the shell. Creatures grappled by the rehabin make a DC 15 Strength save or are pulled into the shell. Inside the shell, they are vulnerable to bite, tentacle, and fling (thrown straight out of the shell opening). Attacks into the shell strike a random creature inside with the rehabin counting as two creatures (for example, with three grappled creatures inside, the rehabin has a 40% chance of being the target and each other creature has a 20% chance). Creatures that escape from grapple also escape the shell.

Tentacle Attack or Fling. The rehabin makes one tentacle attack or uses its Fling.

Thunderstorm (Costs 2 Actions). The rehabin initiates a storm overhead that lasts 2d4 rounds. Each round, lightning strikes 3 times at random locations (2d10-1)x5 feet from the rehabin in random directions (1d16 with 1: North, 2: NNW, 3: NW, 4: WNW, 5: W, etc.). The lightning strikes the highest point within 10 feet of the randomly determined space. A Target must make a DC 23 Dexterity saving throw, taking 22 (4d10) lightning damage in a failed Dave, it happy as much damage on a successful one. Lightning strikes that hit the rehabin strike its shell.

Stone Ink Cloud (Costs 3 Actions). While in water, the rehabin expels an ink cloud in a 60-foot radius. The cloud spreads around corners, and that area is heavily obscured to creatures other than the rehabin. Each creature other than the rehabin that ends its turn there is restrained. It must then make a DC 14 Constitution saving throw at the end of each of its turns. If it successfully saves three times, it is no longer restrained. If it fails its save three times, it permanently turns to stone and is subject to the petrified condition. The successes and failures don’t need to be consecutive; keep track of both until the target collects three of a kind. Objects in the area turn to stone immediately. A strong current disperses the cloud, which otherwise disappears at the end of the rehabin’s next turn.