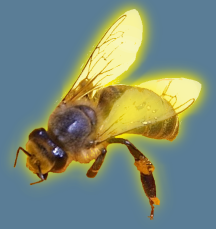 Potenidea are mere pests on their own, though with recognizable magical properties. However, when they swarm, as they often do to protect their hives, they are able to conjure powerful lightning magics against any who have wronged them. Their lightning powers transfer to their wax and honey, giving it properties that are valuable to those brave enough to harvest them.

Swarm. The swarm can occupy another creature’s space and vice versa, and the swarm can move through any opening large enough for a Tiny Arcandidae. The swarm can’t regain hit points or gain temporary hit points.
Innate Spellcasting. The swarm’s innate spell spellcasting ability is Wisdom (spell save DC 13). The swarm can innately cast the following spells, requiring no components:

Spell damage is half if the swarm has half of its hit points or fewer.

In future weeks, I’ll be imagining uses for the wax and honey of these pests, maybe something to justify a bee-keeper-like arrangement. For now, check out some of the many trinkets and concoctions in my item compendium: Who Would Just Leave This Stuff.

1 Response to Biweekly Monster-Potenidea (and Swarm)