On Monday, December 9th, with most of the Citadel House A-listers abroad visiting the gnomes, Lonir leads one old (but inactive) companion and two new arrivals to investigate one of the Citadel wells drying up. The group consists of:

They gather lamps and rope and after a few questions of a local woman, descend the well to investigate the tunnels that seem to be the cause of it drying up. The tunnels have solid limestone walls not characteristic of the ground water holding earth the well would have been dug into. They are nearly perfectly round with a 5 foot diameter branching to the North and South.

They start with the southern branch, passing through a chamber full of seed-like, woody spheres. Bill manages to crack one open with his amulet-turned-ax, finding it full of a goopey liquid with a mass of root floating inside. He shows the others and they discard it. At a fork, they split up, each coming to a cul-de-sac with openings in the smooth stone in the ceiling. Slade and Bill try digging upward, with Bill’s amulet formed into a trowel. They dig until they can’t reach any higher, being joined by Lonir and Lash, who discourage the digging. With no results from digging upward, they head back to search the tunnel North of the well.

On the North side, they encounter a number of forks and pass through a couple large, empty chambers, but finally find all of the forks exhausted except for one off one of the large chambers. They return to that chamber and find it occupied by an Earth Squid!

A fight ensues in which Slade and Lonir do some damage with arrows down its gullet, bypassing its thick hide. However, most of the damage on both sides comes from the growing flames from Lash’s thrown lamps as it grapples Lonir and Bill. Bill is forced to flee, but the flames eventually kill the squid, around the same time causing Slade and Lonir to fall unconscious as the air is sucked from the chamber by the fire. Lash and Bill move in to beat the fire out, and Lash collapses before they finish. 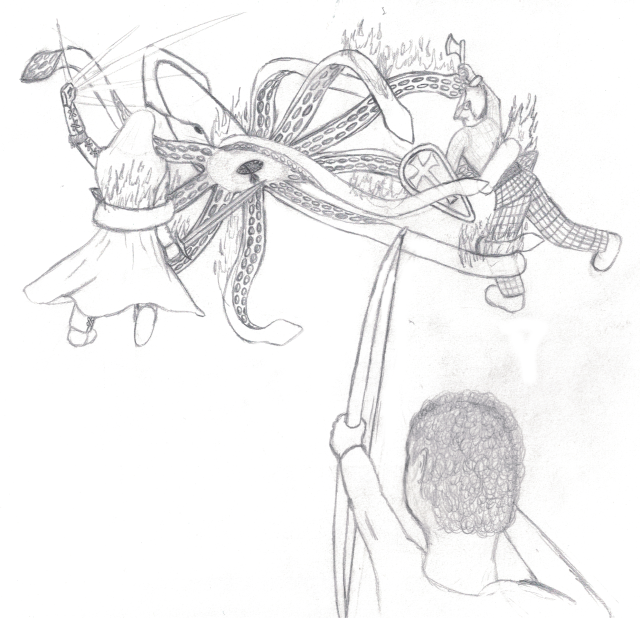 Bill gets the fire out and wakes up Slade so they can carry Lonir to safety, him being the most badly burned. Back beneath the opening of the well, they revive Lonir before returning all three for Lash. Lash has woken up on his own and they proceed together into the last unexplored tunnel, where they find the bones of the creature’s prey, including a fresh deer corpse.

Among the bones, they find some treasure and pair of well-preserved Nekolyn boots, leading them to believe they are magical. They destroy all but one of the remaining squid eggs and inform Matthias that the well can be restored by breaking the stone tunnel walls. Lash levels up.

1 Response to Down the Well