Darvil had rejoiced when his boot stepped on earth that didn’t sink beneath it. Though with each step his boots were finally growing drier, his relief was also shrinking. He had been shipwrecked and then noticed by the local orcs, forcing him into the swamp. He believed the forest he now walked was elven lands, where he would be better received than among the orcs. However, the elves lived so sparsely, especially in the South of their lands. He had little hope of finding hospitality, and he wasn’t equipped to feed himself here. His supplies were running low.

Though he ultimately wanted to find his way North, he had allowed his steps to stray toward the mountains barely visible through the trees to the West. If he could reach the foothills, flora like that of his home might give him a chance at foraging, of which he had managed very little so far. His stomach growled and he plodded on, hoping to find a good rock to sleep against before sunset.

Darvil glanced up as a ray of sunlight pierced the thinning canopy and forced himself to take a breath before looking again. Was that a building on the mountain face? It was; some kind of fort maybe. The road and stairs to it looked maintained, but if it was abandoned it still represented shelter and possibly food stores. He had to get there tonight.

The sun had set hours ago and Darvil felt about to faint from exhaustion, but the gate now stood before him. He wasn’t sure if the guards had seen his climb, but having seen them he resisted the urge to end the hike at the base of stairs to shelter in the cave beneath the complex. He knocked feebly, silently. Mustering his strength, he pounded on the door to better effect. It opened and, unexpectedly, a pair of humans stood beyond.

They glanced at each other sidelong and one reached out to support the pitiful creature and guide him inside while the other ran toward the house at the center of the courtyard. Darvil didn’t speak the human tongue, but the voice seemed smoothly reassuring as he passed into darkness.

The Stormguard summer is a season of mighty storms, especially in Anaithwaite, the Vardor colony on the Southern end of Stormguard. Though the nobles of Anaithwaite take pride in their families’ continuous residence on the island, some grow tired of the torrential rain that drenches most of the warmer months. It seemed nothing could be done about it until one such noble returned from an assignment as ambassador to the elves in the North of the island. Mountains sheltered much of their sparsely populated Southern territories and there he had enjoyed magnificently warm summer days. With rumors of this spreading and the ambassador’s influence with the elves, it was soon arranged to build a manor in that paradise.

Far from any suitable port even in elven lands, the manor ultimately saw little use except as a vacation home for ambassadors already among the elves. Eventually, though, Serlash, a former ambassador to the elves, became the consul of Anaithwaite. During his mission he had spent significant time in the summer home. He had added an altar to Rathillion and built a relationship with the goblins living in the mountains behind the manor. With his ascension to power, he assigned a cousin, Warqua Youngblood, as ambassador to the elves with the secret mission to expand relations with the goblins and establish a trade relationship to buy the unusual and powerful crystals seemingly unique to their caves.

When Serlash fell from power in the colonial government of Anaithwaite, Warqua was replaced as ambassador to the elves, but he and most of the members of his mission–rather than return to Vindilia–retired to the summer home where they continued to traffic the sarpin crystals from the goblins. They now sell the crystals to the orcs on the border of elf lands, as well as to pirates as able. Their activities have drawn the attention of the local elven guardians, but without evidence to tie the summer home directly to the goblin activity they can’t risk investigating and causing a political incident. If desperate enough, they may enlist passing strangers to visit the manor and take a look around, as Benquil, Hilbrent, and Lamila were asked to do.

The approach to the manor is paved in beautiful white stone. The paved path splits near the top, the path straight through continuing to the modest gate house while the right fork leads to a natural cavern under the compound. The cavern is used sometimes for temporary storage and has access to a pair of heavy freight elevators (A) that lead up into the cellar beneath the manor kitchens, as well as other hidden areas. The freight elevators are wooden platforms 5′ x 5′, they have a carrying capacity of 1000 lbs. and are raised using rope and pulley. The block and tackle used provides a mechanical advantage of 5.5x, meaning that a character capable of pulling with 100 lbs. of force applies 550 lbs. of force. The carriage itself weighs 250 lbs., so such a character would be able to lift the elevator and 300 lbs. of additional supplies.

Beyond the compound gate house is a garden with walking paths and a variety of flowers and other plants. The east wing of the main house ground floor is dominated by the kitchens, which have small dumbwaiters (B) up to the honored resident quarters. These dumbwaiters are similar to the freight elevators, but with platforms 2.5′ x 2.5′, a capacity of 200 lbs., a mechanical advantage of 1.8x, and a carriage weight of 25 lbs. The kitchen has stair access to the cellar (M) where the freight elevators enter. The wood burning ovens of in the kitchen share a chimney (C) with the rooms above that have fire places.

The west wing of the ground floor is mostly underground. It contains the proper entry to the house with stairs to the upper floors (G). Quarters for the garrison fill the rest with a trap door and ladder (P) in one of the rooms accessing the manor dungeons. Secret accesses to the floor below are also in the hallway (N and O). The rest of the garrison on the floor above is connected directly by a stairway at the back of the hall (E). Also on the floor above are four large rooms for honored residents (currently occupied by Warqua’s guard and other unsavory members of his team) and a large common area directly above the open area that divided the ground floor of the building. Adjacent to the sitting room there is a stairway up to the penthouse where Warqua resides (H), across from that a hidden stairway down to the lower levels (J). Ladders (D) in the garrison portion of this floor

provide access to the tower where an archer is usually stationed. Warqua’s penthouse has its own observation tower accessed with the spiral staircase (I). 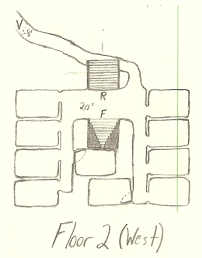 At the back of the garrison quarters and deeper into the mountain is the garrison armory on either side of the stairs from below (E). Another staircase (F) leads to additional garrison quarters, though these are deep underground and usually kept empty (except when there are enough guests occupying garrison rooms with windows to force the garrison to use these less desirable rooms.

In this little used section of the manor, there is a stair case continuing up through the mountain toward a balcony and the not too distant peak where the altar of Rathillion resides (R, S, T, U). There is also a small tunnel (V) leading down into the mountain. The garrison members subtly discourage investigation into this area on account of that tunnel, which is fairly easy to notice and leads to tunnels where goblins reside. On occasion, some of these goblins may

even  be using the vacant rooms in this section of the manor, though they prefer not to.

In the tunnels in the mountain behind and under the manor, the goblins have cut a few small rooms where they generally keep a small liaison to Warqua, and where their delivery caravans can rest before making the journey back to Ratrinken where the Sarpin Crystals are mined.

The goblins here are not nearly so well equipped or trained as the soldiers of the manor’s garrison. Their purpose is not to defend the manor or the operation there in any way; they have been assigned to protect against betrayal on the part of the humans. They guard the passages leading to Ratrinken and deny passage to anyone whether an ally of Warqua or not. If attacked, those of them that hold sword and shield would attempt to slow assailants down while at least one of the lighter equipped runners flees down the tunnels to warn Ratrinken, hopefully losing any pursuers in the many tunnels that intersect the true course during the several day journey.

Though the goblins distrust the humans and their force there defends a bottleneck leading to the goblin capital, Warqua is not nearly

Their are a couple small chambers on this floor accessed by a secret trap door (N) where the garrison sometimes plays card games.

so paranoid. In addition to the tunnel entering the upper levels of the garrison, there are two other tunnels that grant access to the lower floors of the manor. One leads to the dungeon (Q) and allows the goblins to carry off prisoners discreetly, sometimes in exchange for crystals and other favors. The other leads into a secret store r

This store room joins to the rest of the manor only through the northern rope and pulley elevator (A2) used to bring normal supplies into the manor. The door to access that elevator from the hidden store room is well hidden on both sides and the goblins are unaware of it.

Depending on conditions, this store room may also contain payments prepared for the goblins in exchange for crystals and other illicit items Warqua desires to keep hidden when visited by dignitaries.

the cult to Rathillion, a god worshipped among politicians, but not openly. The cultists live on an underground level between the secret store room and the cellar. Warqua has direct access to them via the secret stair ways leading their from the hall beneath his quarters (J, K, L) and they have access to the cellar where they can obtain the basics for their meals.

The cultists come and go at the manor through the south freight elevator which is joined to their quarters by a false wall within the shaft. This is usually the route they will take when visiting the altar on the mountain peak, rather than the stairs at the back of the manor.

The cultists wield the power of Rathillion primarily in the form of basic illusions. Warqua will often visit their leader in search of council, but also aide in misleading those who might know too much.

What kind of loot might be found in Warqua’s quarters? As a mage and noble, he probably ranks around a 50 on some of the tables in my compendium of flavorful loot: “Who Would Just Leave This Stuff.”