Stepping away from Trethal for a bit, a setting that I’ve created for my new-to-tabletop group. In our last session they destroyed the cult of the Sleeping God in Taliton, in the process killing about a fourth of the population. They decided to skip town without asking for their reward from the mayor, and indicated they wanted to head to a large city where they could spend their loot on magical stuff and (out of character) begin a mystery focused story line. Mhyrinport and the farmland along the Ragged Coast needed to sustain it were the answer. 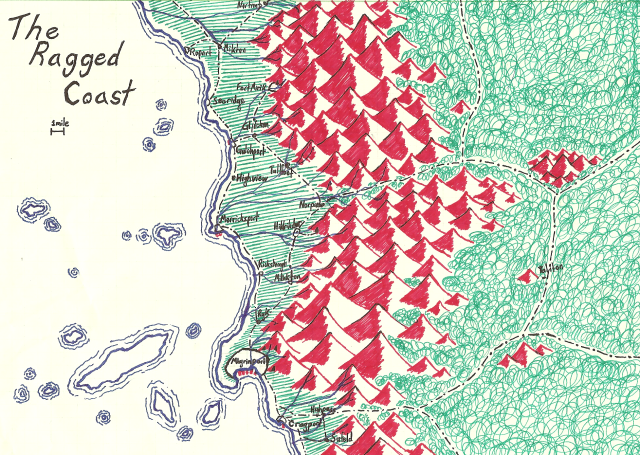 Mhyrinport has a population of roughly 15,000, not including the nearby gnome holds. Most of the food grown between the Ragged Mountains and the Ragged Coast goes to feeding the population of the city, as well as most of the fish brought in by fishermen. The land is fertile and farmers live well from selling their produce to the industrious populous of Mhyrinport a center of trade and craftsmanship.

The entirety of the Ragged Coast currently falls under the protection of the Mhyrin Empire, named for the founding gnome family, Mhyrinshind, but ultimately created through the alliance of three gnome powers in the Ragged Mountains: the Mhyrinshind, the Mirikglindel, and the Hildrikfrick. Though most of the population of the Mhyrin Empire is human, they are still ruled by the gnome oligarchy that founded the empire and continue to immigrate to the frontier empire seeking the wealth there.

The gnomes guard there borders closely and despite being on the frontier it is a safe nation in which to live, with little pirate activity and merchants only hire escorts for the dangers beyond the borders of the Mhyrin Empire. This peace is maintained by a totalitarian, gnome, magic-infused, iron fist, but the gnome force is beginning to fracture from tensions within. Mhyrinshind suspects the other families of competing for power and has begun to act on those suspicions.

How do you like the Ragged Coast?  A good place for campaigns? Maybe a political intrigue campaign? Anything else you want to know about? Let us know below.