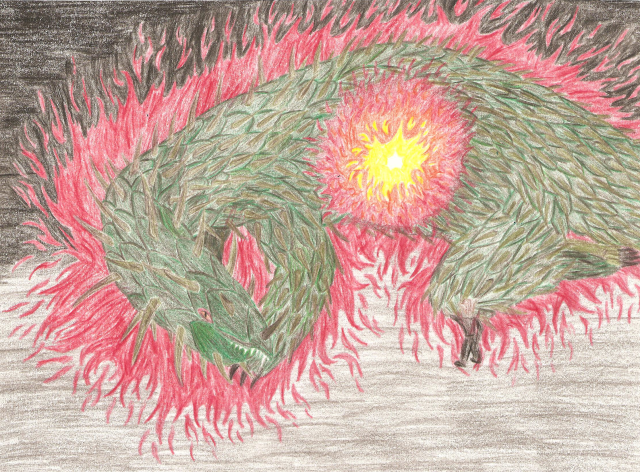 Ikrik Baldskull knew he was getting close. His detect magic spells were showing a brighter and brighter aura down in these caves. It had all the right components, light, Ra, Des, order, ‘ru,’ ‘siu.’ The Helm of Courage was down here. Somewhere in this cavern.

But it wasn’t the only thing in the cavern. Something big, bulky, breathing. Of course, a dragon would have hoarded it. Rumor was Gydrik Hardsole had been slain by a dragon. Well, Ikrik would slay the dragon, take the helm, along with the whatever else of value was in the treasure.

He began casting, ‘on ki jai,’ passing through the Ful arc several times, adding fire and wind fingers as he went. He needed enough to burn through a dragon’s hide, and he had all the time in the world. A little chaos to cover more area, just for good measure.

He finished the spell through the Ku radius and a blaze of fire brighter than he’d ever seen lit up on the dragon’s side. He expected the dragon to cry out, but instead he heard himself screaming. Fire had wrapped around his legs. It engulfed the dragon as it woke, groggy and calm.

Mind Weave Dragons are greedy and weak-willed. They are however very powerful, growing only mightier with age until they plateau at around 20,000 years old and between 1,600 and 2,000 feet long. Colored dragons are aggressive with lots of offensive power. Metallic dragons are passive and with defensive abilities.

The general dragon post describes Mind Weave dragons in general, including how to interpret dragon characteristics defined below.

Magical Dispersion: Any raw elemental magical power, such as fire, heat, lightning, death, life, cold, concussive force, light, dark, wind, and negativity, is absorbed by the dragon’s spikes in the area and reradiated by spikes all over its body, dealing no damage to the dragon. Any damage the magic would have done to the dragon is emitted uniformly from the dragon’s body.

Ranks of Spikes: Any attempt to approach the dragon within 2 feet requires a dodge roll against 15, a +1 bonus can be obtained for each extra foot of movement distance for the turn used. A failed dodge on approach results in 1d10 pierce damage.

Description: Adamantite Dragons are reclusive and ugly. Though their peculiar powers are respected by other dragons, they are considered repulsive and avoided whenever possible. These massive, lethargic dragons spend much of their time sleeping, but they are eager to deal with intruders in their lairs. They are flightless, having no wings and weighing so much they could not fly if they did have them (as dense as lead, 700 pounds per cubic foot on average). But they are reasonably swift on land. They tend to dwell deep underground, where they can climb and pursue prey on foot without the chance of escaping through flight.

In the Dragon Realm, Adamantite Dragons are considered the magical masters and are approached for the magical ability when large spells are needed. Despite their massive magical ability, they are too dense to cast flight spells on themselves. Nonetheless, they rely heavily on swift spells in battle, using pure magic only when time is not a factor.Though their magic dispersion makes it impossible to heal themselves through magic, their ability to meditate assists them in recovering from battles where they take damage. When attacked, their first move will often be to disable mage’s with their breath weapon before casting their own spells.

Adamantite dragons spend their rare waking hours seeking treasure, often with the aide of magic. This often means assaults on underground races in their settlements. For this reason, they often speak some dwarvish, gnomish, goblin, livecap, and drow. They sleep near the treasure and take notice if any goes missing.

As a player, how would you react to finding a massive sleeping dragon? How would you fight something that shrugged off traditional magic? What kinds of spells might you use? Comment below and share your thoughts.