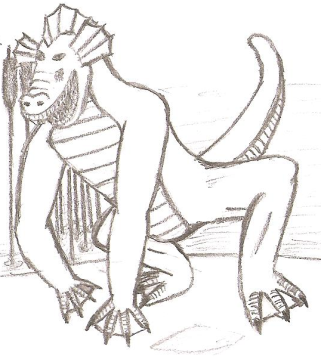 They found the creatures where the sentries had reported them, digging at the solid earth at the edge of the swamp.

In the last six years they’d nearly blocked the strait with their shallow swamp waters. They couldn’t let them take more dirt from inland.

And there was no sense in running them off. The issue had become dire. Better to just kill them than let them escape to dig away earth somewhere else.

These little swamp expanders have been in my head for years. The Invasive Species Blog Carnival finally got them out on the blog.

Description: Tulkem are often mistaken for lizardfolk by the uneducated. Their resemblance is explained in various ways by scholars on the subject, from being distant relatives of lizardfolk to being magical experiments on lizardfolk gone awry. With no basis for these theories, they are based mostly on folklore, the most reliable of which are those repeated among the lizardfolk themselves.

Tulkem are not capable of more than very rudimentary speech, like parrots, and their thinking is very basic and instinctive. Their strongest instinct is for reproduction, but as a direct consequence of this, and their long lives and lack of natural predators, they frequently suffer from overpopulation in their swamp habitats. Their second strongest instinct helps address this problem, driving them to expand the swamps both by digging down the solid land around it and by moving dirt into adjacent bodies of water to make them shallow.

Tulkem are often found in massive packs. Their populations are huge and whole clans of them will often be seeking new swamp by creating it. It is not uncommon for them to behave like meerkats, with several tulkem on guard, others hunting, and others digging. They are more aggressive and will attack in full force unless threatened enough to necessitate retreat. They rely on mob tactics to win fights, wrestling and attacking wildly.

As a player, how would you handle a Tulkem expansion group you were sent to deal with? What if you were assigned to a ship keeping them from blocking a water way? What would you do? Comment below to share your thoughts.