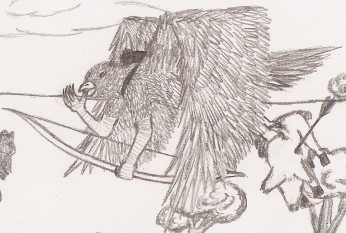 In honor of Osprytes this week, today’s character is an NPC from Carrion Canyon. It’s also been since Orc week (early September) that I’ve posted a Ranger, and I love Rangers!

Kok Koyak hatched in a Carrion Canyon nest. Like others in the tribe, his diet primarily consisted of river fish, but he loved the occasional wild pig or rabbit. This love of red meat, combined with his natural skill with a bow, led him to be one of the most respected hunters of the tribe. He hunted voraciously, feeding his nest and neighboring nests, and on good days contributing to the entire tribe.

Kok Koyak operates with the blessing of the council. He is the most vigorous defender of the tribe against outsiders and spends much of his hunting time keeping an eye on the area for enemies approaching or signs of their passing. To some extent, he leads the warriors of the tribe, but he is subservient to the council. When they tell him to call off the chase, he usually obeys. He has become powerful in his effort to defend his tribe.

Skills: Weapon Skill I, Perception I

Kok is sub-optimal for his level at level 5, partly due to sub-par starting rolls, but mostly because he spent levels 1-4 as a Hunter, building to Ranger as quickly as possible. However, if the level of the party merits boosting his level, he becomes more optimal with each level after level 5.

For his level, he is a formidable archer, but he has little else going for him, besides some basic spells and minor tracking skills. However, with the ability to fly, his archery may well be all he needs. He’s the guy you would have trouble avoiding in an effort to loot Carrion Canyon. The council priests will ignore you if you leave the tribe alone, but Kok will make a pass at any party he sees approaching that part of the canyon. If he misses an approaching party and returns to be told a party has entered the dwarven complex, he will lead a band to flush them out.

How would you deal with this guy? Would you try to take him down before approaching the canyon? Or would you rather deal with him and his friends in the close quarters of the tunnels? Let us know in the comments below.