Last time in Trethal, I described the most powerful nation: Lyseria. Now that’s all good and well as a place for adventures to start, or for grand scale good against evil war adventures, but to follow the struggles of the little guys, the Lyseria frontiers would serve use better.

Here we have mountains, forest, desert, and a swamp if you go far enough. There are plenty of cities large enough to resupply in the immediate area, but we’re far enough from the capital for corrupt local authorities and small scale moves for political power to play a role.

Later today I’ll post a castle I plan on putting on the Northern coast of High Lake. It could be occupied by a border baron or something, but I think I’ll put some sort of hidden evil in it, possibly posing as legit, or pretending the castle is empty. This, and other intrigues in the area could keep players busy near the Sliver Lakes, but I’ll bet they want to venture out. 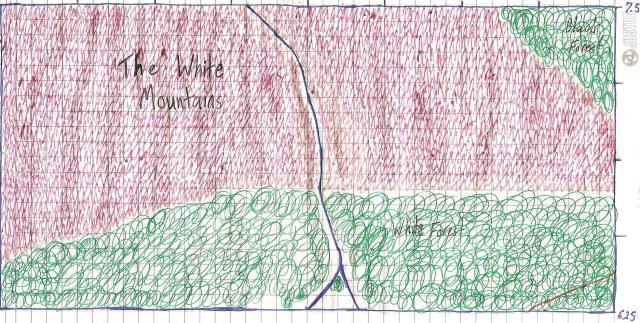 To the North loom the White Mountains. Keep in mind that the Archons ruling Lyseria have made great efforts to access the precious metals in the White Mountains, and have been unsuccessful. This region should not be trifled with, enter at your own risk. The Black Forest to the East and the Seven Peak Woods North of that are both untamed lands, but many villages and lumber camps exist in the area, leaving players a safe place to fall back on and limiting the dangers. 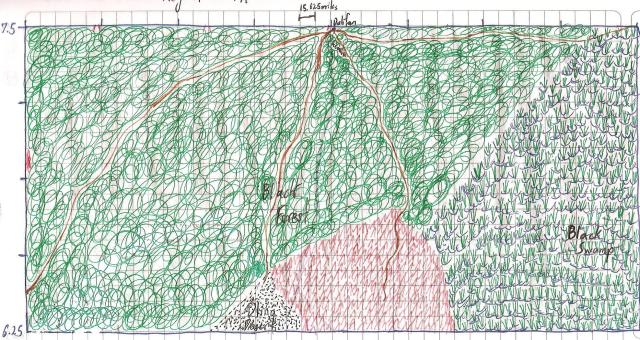 The Black Forest is also a safe region for slavers to operate. These slavers can sell their wares to small groups in the area, but since both Lyseria and Alfoli vehemently oppose slavery, these slavers must traffic most of their slaves across the Dlina Desert to Sumak in the South, where there is a very large slave market.

These slavers are among a very few people who brave the Dlina Desert for long, though there are rumors of civilizations one time existing in the desert.

One of my current test campaigns takes place in the South of the Seven Peak Wood region. I’m not sure where they’ll go next, but I am currently developing the immediate area and will be making posts about the region in the future.

Do you like the look of Trethal so far?  Since I have players in the Seven Peak Woods, I will be putting more immediate effort there.  Is there any part you would like to know more about?  Let us know below.