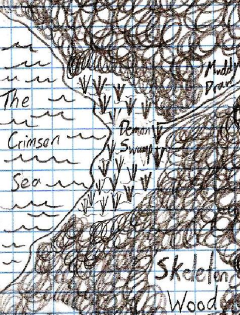 The Crimson Sea was first discovered by the Alvar explorer Myphus Newbud. He called it the Crimson Sea because when he came upon it because he found it red like blood. When Alvar began to build in the area, it was no longer red. They continued to call it the Crimson Sea, but with time they forgot the original reason for the name. They assumed that it was associated with the constant war with Tinen across the sea, nevermind that neither nation seemed to be able to maintain any ships larger than fishing sloops on the sea.

This failure to create fleets on the Crimson Sea is directly connected to the original reason for the sea’s name. Myphus had found the sea shortly after a series of battles in which the Lizardfolk of the Demon Swamp, the Empire of Wesarin, failed to conquer the Merfolk of the Crimson Sea. The blood of both factions had stained the water red.

The Crimson Sea Merfolk have claimed the entire sea as their right. The consider even the Alvar and Tinen fishermen who stay near the coasts to be poachers, though too small a matter to be punished with the same prejudice with which they sink larger transport and war ships.

The Crimson Sea Merfolk take it as their duty to defend their sea, for they consider themselves to be an isolated colony of a larger Merfolk empire to which they were once connected by a strait between what are now the Hungry Mounts and the Chattering Mounts, through the Midgeland. The land has continued to rise and the Black Isles have since risen up where they consider many of their kin to live. Though they have had no communication with the other Merfolk for thousands of years, they still remember their connection to them and fight in their name.

Would risk going into the Crimson Sea and angering the Merfolk?  As a Master Weaver, how would you motivate players to go there?  Let us know below.