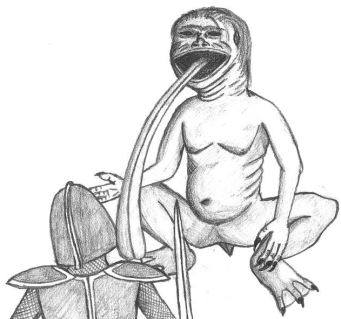 The inconspicuous tree frog looked on from the pillar of the king’s balcony where it had situated itself. Guards had come out and now searched the balcony under the vizier’s supervision.

The king’s vizier was a mental mage and frequently manipulated the weak-willed king, revealing that vulnerability in the kingdom. He would regret his petty conspiracies.

The frog began to disintegrate into a thick fog as the king stepped out for his nightly star-gazing. The fog wafted down to the king, possessing him. The vizier wouldn’t understand why his spells weren’t working.

Special Defense 2: Fog Form, becomes a fog, taking no damage from physical attacks and ½ damage from other attacks.  36 flight speed.  Pass through anything not air tight.  Usable 4 hours a day.  Transformation takes one turn.

Special Attack: Possession, target must make a will check (will+1)/2*3d6 against 3d4+2 or come under the control of the Drude.  Usable 3 times daily only when in fog form.  Victim continues to make will checks against 3d4+3 each turn.

Description: Drudes are among the least desirable of devils.  Short and toad faced with gangly legs, drudes are capable jumpers and join combat with their long tongues.  They’re also venomous, using their claws to poison foes.  When overmatched, Drudes use their fog form to avoid damage and possess powerful and weak willed foes with whom to attack the enemy.  Their frog animal form is used primarily for hiding and for infiltration, but their giant snake form can be used for combat.

Drudes are both respected and reviled among devils.  They are hard to get along with and loathsome, but have great power and are highly influential in raising the hellhounds and other devilish creatures.  Their talents with beasts are highly admired.  They are also the primary superiors of the Decans and the Trudes.

When summoned, Drudes will be eager to control weak willed rulers and other powerful figures.  They will quickly accept missions that are likely to give them the opportunity to approach such figures.  They will desire to do this primarily as a part of the vanguard of a devilish invasion.  If no invasion is imminent they may enjoy manipulation anyway, but will also desire to return to their herds.

As a player, you could summon a drude, with a little luck an manipulation. Would its abilities be useful to you? As a Master Weaver, would you use one against your players? Comment below to share your thoughts.