Posted on 7 December 2013 by jameseck 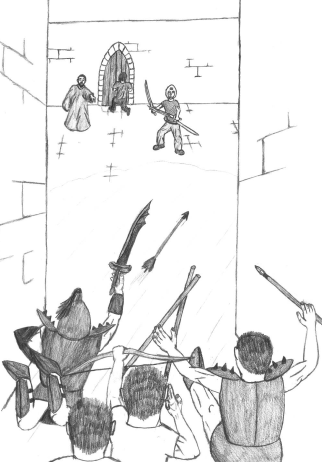 Orcs could be heard yelling as they pursued them down the corridors, they couldn’t be more than 30 seconds away.

“Tobias, pick the lock! I’ll slow them down.” Piron began casting, left arm moving rhythmically as his fingers flashed open and closed. “Ki Loa!” He finished just as the orcs rounded the corner and a burst of cold swept over them. The orcs stumbled over slick ice, a couple of them dropping dead and frozen to the ground.

The ice storm is a pretty standard magical effect. In our case, the storm deals cold damage and makes the ground slick, making falling more likely. It uses AoE to spread over an area and range to keep the caster out of it.

Pow! Instantaneous burst of 4d6 cold damage 40 feet away with 5 DoP AoE for 50% damage up to 7 feet from the center, 25% up to 14 feet, and 2% 40 feet away where the mage is standing. That’s the simple part, more complicated is how the 2d6 cubic feet of water (frozen with 2 DoP of cold) fill the area with a slick icy film.

This uses a principle like that used in Mud Pit and Hail of Stones. This means that 2d6/5*AoEmax is the thickness of the ice in any given cell. This gives an average of 1.2 feet at the center (enough to freeze people to the ground) and at least 1 inch of ice up to squares with a far edge 29 feet away from the center. The slickness is pretty much uniform and maximized in this area, squares outside this area will have thinner or patchy ice and be less slick.

This spell costs 136 SP. It would take a caster with 15 Dexterity and no Agility 16 seconds to cast if left-handed and 28 seconds to cast if right-handed. This spell requires advanced mastery of the Zo Arc to deal frost damage and freeze water. Obviously not a cheap or a fast spell. Can you think of an alternative way to get a similar, if limited, effect for cheaper? Maybe you can afford to hit a smaller area, or maybe you don’t need any frost damage at all, just the ice slick.

Interested in cold spells? They’re another way to deal damage and the Zo arc can have a lot of effects, it’s probably worth getting. Any other spell types you’d like? Tell us below and we may do it in a coming week.