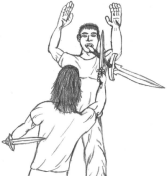 Any character can disarm an enemy.  A disarm attempt is treated like a parry, but experiences a penalty.  A disarm attempt that gets a To-Hit better than 20 works as a parry and has the potential to disarm.  In order to actually disarm the opponent, the To-Hit must beat 30+enemyStrength/2+(ownWeaponLength-enemyWeaponLength), except against two-handed weapons where the full enemy strength is used.

Characters with no levels in Disarm take a penalty on disarm attempts.  Levels in Disarm reduce this penalty and at higher levels the character receives a bonus when disarming.

Any open-handed parry must function as a disarm.

Would you spend minor abilities to improve your chances of disarming a foe?  Why? Would it be to play a pacifist character or because you believe it to be a good tactic? Comment below to let us know.