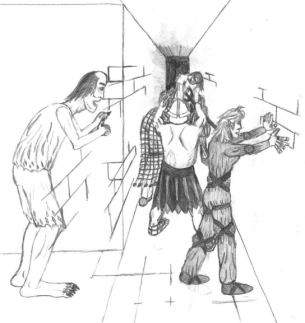 Special Attack: Illusory Casting level/4 as if with an intelligence of 30

Description: Perhaps misnamed, phantasms are fully embodied undead not unlike zombies in most aspects, though quicker and often more resilient.  The phantasm, however, will not resort to biting, and will do its best to not be seen at all, thus earning its name.  He will instead use illusions to confuse, distract, or deceive the enemy, trying to turn them against each other or keep them occupied until others can engage them.  Their illusions are so believable as to be seen through by only the most perceptive.

A clever necromancer will use a phantasm to sow confusion and redirect enemies to keep them within reach of his horde.  A phantasm is a valuable and rare resource that he will keep out of the enemy’s reach if at all possible.

Phantasms are animated from dead Illusionists.

Have any ideas how you would use phantasm if under your control?  Something you’d like to throw at your party?  How about as an enemy, how does it’s existence effect your character build?  Comment below to share your thoughts.