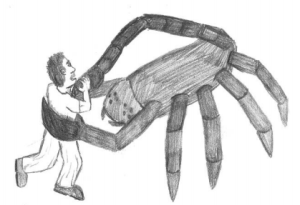 Special Attack: 75% poison on sting, 1d4 damage for a number of rounds equal to damage.

Special: On a successful claw attack, the scorpion may begin a grapple with that claw which continues even when stinging.

Description: Giant Scorpions are uncommon phenomenon occurring primarily in the desert away from populated areas, where they have the opportunity to grow and breed in hiding. In these cases they will often occur in groups. Lone giant scorpions are sometimes witnessed as they wander from more densely scorpion populated areas in search of food. This wandering may often bring them to populated areas where they can be a significant danger. There are also breeds of giant scorpions known to gather and multiply in forests, but these breeds are less common due to the greater tendency for humanoids to populate forested areas. They also wander less frequently, having more abundant prey in forested areas