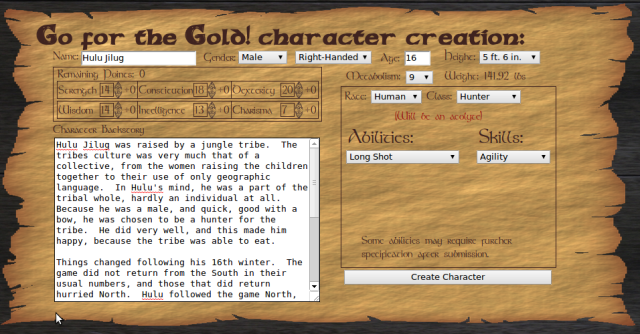 Hulu Jilug was raised by a jungle tribe.  The tribe’s culture was very much that of a collective, from the women raising the children together to their use of only geographic directions.  In Hulu’s mind, he was a part of the tribal whole, hardly an individual at all.  Because he was a male, and quick, good with a bow, he was chosen to be a hunter for the tribe.  He did very well, and this made him happy, because the tribe was able to eat.

Things changed following his 16th winter.  The game did not return from the South in their usual numbers, and those that did return hurried North.  Hulu followed the game North, into the cold, for their winter stores were all but depleted.

When he returned with the meat he had been able to obtain, he found his tribal village destroyed.  He had never seen an orc before, but instantly hatred for those who had left their dead among the dead of his own family rose within him.  He was a part of the collective, but the collective was destroyed, except for him.  Now he was the tribe.  The tribe agreed that the orc aggression would not go unanswered.  The tribe set off to the East, tracking the orc host.

The first thing to note about Hulu is that his backstory locks in place the character’s starting situation and asserts a lot about recent events.  It doesn’t tell the story of just his life, but of larger entities in the campaign setting.  These elements in a backstory might turn a Master Weaver off of the character, or might be explained away by saying Hulu has traveled a long way since then, lost track of the orcs, and is in our current setting now.  On the other hand, if it fits the campaign, it could be a really attractive backstory to the Master Weaver.  Either way, players should be careful not to meddle too much with the setting in their backstories, unless the Master Weaver approves of it.

Like Fredrick Hymun from last week, Hulu is a Pre-Tier class headed for a Second Tier class.  As a Hunter and with his Attributes, he will become a Ranger at level 3.  Even so, early on he will need backstory abilities to be very effective.  I include backstory elements to support Agility, Direction Sense, Crusade(Orc), and Weapon Mastery(Bow).

Hulu’s Agility, Constitution, Long Shot, and ranged weapon preference make him an idea scout for the party.  Also, because his dexterity is so high, he should be useful as a supporting character in combat.  Long Shot coupled with his 20 Dexterity put him well on his way to being a sniper.  His strength means he can be effective with a heavy bow as well.  Once he reaches ranger, his contributions to the party will include magic and some utility abilities.

Have requests for a character build?  Let us know below.  Maybe we’ll make your character next Thursday.