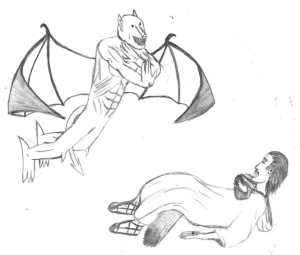 Turn is one of the corner stone abilities for clerical and priestly characters.  Turn comes in 4 varieties: Evil, Good, Chaotic, and Lawful.  The variety of Turn expresses the alignment which the Turn is intended to repel.  Getting levels in Turn is often a good testament of dedication to a deity.  For example, a cleric wanting to please his deity of Order might take a level in Turn(Chaotic) which would certainly please his deity and likely come in handy against chaotic foes.

Turn has a base cost of 40sp +10 sp per individual to be turned, has a range of 20 feet, and keeps the target at bay for a period of time dependant on the target’s alignment, level, and will, as well as the turner’s level in Turn.  The length of the turning is determined by the equation

where the time is in seconds.  This chart indicates the time of turning by alignment and level in Turn.  It is currently configured for a Common Demon(which is -10,-10 in alignment, level 4, and Will II), as pictured above.  If the priest in the picture has Turn(Evil) IV, then his turn will last 18 seconds, long enough for reinforcements to arrive, perhaps, or long enough for him to stand and cast a powerful spell.

Because most foes do not have extreme alignments, Turn is a situationally useful ability.  However, it is effective against Demons and Devil, as well as against most undead who have  the alignment of their controller averaged with -10,0 (Pure Evil).

Turn sound like it’s worth a minor ability point?  When do you think you’d be able to use it?  Comment below to let us know.