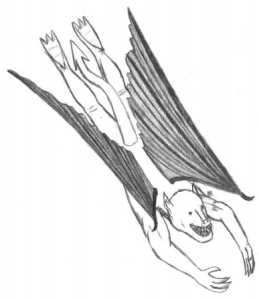 A Common Wind Demon in the dive.

Demons are highly evil and highly chaotic beings from the Abyss.  Demons come in six general varieties, associated with the Elemental Spirits of the Arcane Circle.  Because of this they are sometimes called “Evil Spirits” despite being very physical beings.  The six varieties are Fire, Wind, Ice, Water, Earth, and Lightning.  Each variety has powers befitting its element.

In each of the varieties there are a further four tiers reflecting the power of the demon: Lesser, Common, Greater, and Epic.  While Lesser Demons are weak of will and body, and therefore generally manageable by a small group of low level adventurers, more powerful demons can present a serious threat to even highly experienced adventurers.  Fortunately, more powerful demons are far less common.  Powerful demons do not so much rule as intimidate and abuse weaker demons.  Being chaotic, demons have no larger organization among themselves. 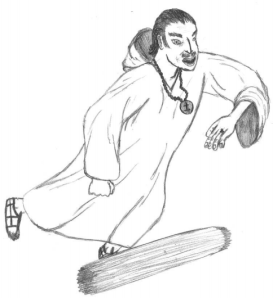 A helpless innocent fleeing the demon.

The primary means for demons to enter the mortal realm is by being irresponsibly summoned by magic-users and others able to summon them.  When summoning demons, the summoner can use his knowledge of the arcs of the arcane circle to increase or decrease the chances of summoning different varieties of demons.  He can also use his knowledge of summoning to modify his chances of summoning each power level of demon.  Once the demon is summoned, the summoner must engage it in a war of wills in order to assign it a task or force it to answer questions before banishing it again.  If the summoner loses this war of wills, he is likely not only to bring death upon himself, but upon helpless innocents in the vicinity.