Wisdom-Wisdom measures the character’s mental acuity.  It is a kind of intellectual dexterity and like dexterity is used for To-Hit multipliers, but for spell attacks with a target:  (3d6)*wis/10.  Points in wisdom increase the character’s total spell points by 2*level per point of wisdom(half as effective as intelligence).  Wisdom is also the primary factor for spell point recovery, each point of wisdom recovering level/2 per hour(2.5 times as effective as intelligence).

Wisdom is important for all casters, but especially for religious characters, like clerics and priests.  These types of casters generally have more reservation and a steady demand on their powers to heal and empower their companions.  Monks also use it as a basis for their healing through meditation.  Other casters of course benefit from faster spell point recovery and higher spell point capacity.

Alignment-Within a character is a constant conflict between good and evil, 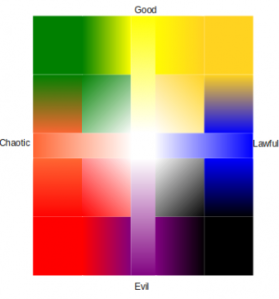 chaos and order.  The state of this conflict is reflected in the character’s alignment as charted on the good-evil and lawful-chaotic axes.  A character’s alignment consists of two values, each between -10 and 10.  Negative values indicate the extremity of the character’s chaos or evil while positive values indicate the extremity of his lawfulness or good.  A character with alignment 0,0 would be truly neutral with regard to both law and chaos and good and evil.

At the Master Weaver’s discretion, character actions effect alignment and it can change fluidly over time.  As one might suspect, evil acts do less to effect an evil character’s alignment than they would a good character’s, and so on for all the other combinations.

Alignment can be detected with Sense Alignment.  It also factors into the Turn ability.  Spells can be designed to effect only good or only evil and some magical or divine artifacts differentiate between alignments in the benefits they give their users.  Certain deities may expect a certain alignment of their followers, but most will only expect followers to act according to their tenets, which actions will often affect alignment.